Sorry for the lag in the posts,  but yes I am home.  things didn't go as planned this year in my adventures of gold prospecting this year.  Had alot of fun and glad I went to colo again but its time to get busy with my place.
Got home and right off the bat I had to fix the water line that was busted.  Had to dig it out by hand but it wasn't that bad.  Nothing like having accessible water (without the leak)    It  has been hot here but not as bad as it had been this summer.  Thank goodness.   Got the tractor home and mowed the burnt up grass around the house site and the shed.  Been doing some scrounging and came up with some wood and power poles for the lean 2 that I am going to build onto the storage trailer shed.  I have also been rethinking my house situation,  have to let it be a surprise if I go with what I am thinking.
anyway,  just a short note to say hi to you all and to let you know I was still alive and kicking :O)                be safe all  :O)
Posted by Notlim at 12:01 PM No comments:

can you see it? 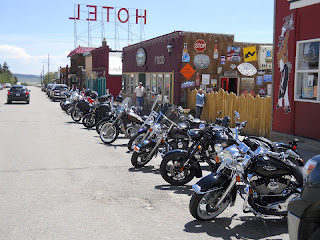 its there, right next to the Harley lol
it's the red one.
Posted by Notlim at 1:18 PM No comments: 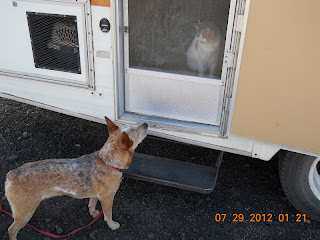 Sasha trying to get patches to come out to play "tag" 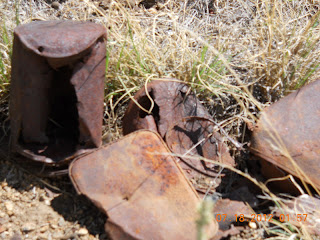 Just some old tin cans at the Granite Cemetery where the the old town once was. 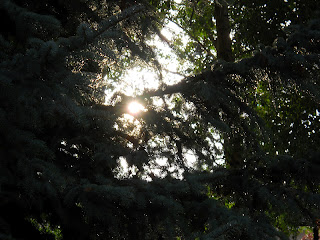 Just me messing around with the camera 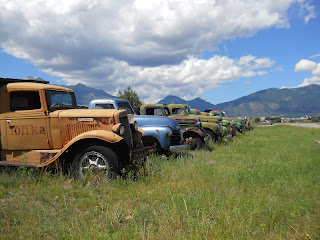 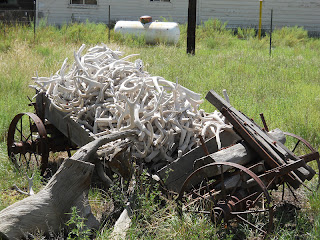 Alittle over loaded maybe?   hundreds of sheds that the guy had found over the years with a few that he actually hunted too.
Posted by Notlim at 1:03 PM No comments:

Just sitting here in the fairplay Park Bar,  no I'm not drinking either :O)  just eating lunch and using their wifi.  I've been doing some sight seeing and went to a auction yesterday, in the middle of no where!!  said it was in como but it was south of Como out in the sticks alooooong ways :O)  rode the hondo there so it was a nice ride.  Didn't buy anything just mainly watched things sell, like any other auction, some things went cheap and other went really high.
The other day I introduced myself to some gold prospectors along the river here north of fairplay, at first they was not very friendly but they warmed up after a while.   They were working on their trommel and not having much luck at it.  I visited with them for a few hours while they tried anything and everything to fix it.  The boss took me over to a tub and said watch this.  He took a small pan and put about 2 cups of material out of the tub and panned it down just a little bit and there was more gold showing in it than I have found the intire time I have ever been out here prospecting.   it was amazing!!  hey only run about 800 ton of material a day through their machine so I don't feel so bad with the little bit that I/we have found :O)    It was really cool to see the operation up close.  I'm going back Monday to watch them actually run material. They even told me if I was around later in the week that I could watch them do the clean up.  So I will be around here for a while still lol
The weekend warriors are showing up at the bar today,  I'm speaking of the Harley riders.  its funny, I have the Honda parked out right in front and alot of them stand around and look at it and make comments about how tall it's stance is lol  Then they walk in and look around as if to see who is riding it.  Of course with my beard and tattoo on my arm they look at me and dismiss me as the rider. Guess i look to much like a Harley rider.   Some of them will actually ask the waitress who's bike it is and she points at me lol  its fun to see their faces and expressions.
Anyway,  just got done eating my chicken strips.  Going to be going for now.  Hope all is well and be safe :O)
Posted by Notlim at 12:35 PM No comments: