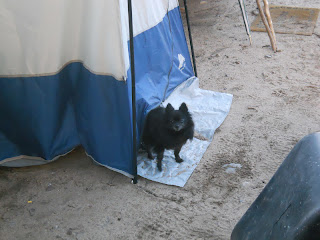 2011
This was last year at point bar in colo, for some reason Cricket was walking back and forth thru the zippered door on the shower. She was really getting into it :O) 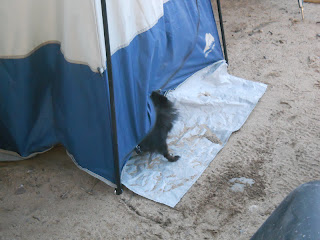 2011
She was really getting into it lol  She was making huffy noises and grunts lol  We were all sitting around laughing at her antics :O) 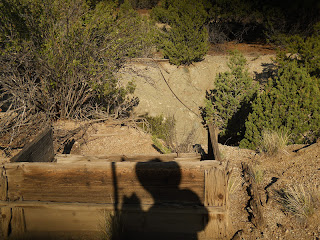 2011
For some reason I just love this picture.

lol sometimes I wonder about myself

LOL  sometimes you just have to laugh at yourself.  For the last few months I have been wondering why my blog sign in page has been coming up in a foreign language.  It was a curiosity more than anything. I couldn't seem to figure out what the heck I had done to cause this or was it a outside influence.  Shouldn't have wondered much really, it was obviously a blunder on my part but to fix it I wasn't sure or how to do it.  I clicked here and there to figure it out but nope, it would remain in the foreign language.
It really want a problem, I knew where to put my password and such and when I would do that then my page would pop up and all would be good in my world lol   well,  lol   I was signing in here and for the very first time I noticed this little bitty drop down icon in the lower right corner of the page.  I would like to say it was hidden or something like that but I cant. I just simply did not see it down there.  I had tunnel vision apparently lol  It was in the odd language that looked like chicken scratches in the dirt but I clicked on it anyway, low and behold, there was a list of languages lol  and near the top was one that I could read :O)  So anyway. :O)  my deli ma is fixed on the blog lol I even sat and chuckled to myself about just how blind a person can be.

Not much has changed my way, I came down with a rally nasty cold/flu bug.  Thanks penny :O)
My kidney stone has been trying to move around on me :O(  that is not good at all. Last night was the worst its been. I will have to be going back in to the hospital to maybe try to get rid of it this time for good. I hope.....   I really don't know much new, It did rain the other night. Felt cold enough to snow.  Actually it wasn't but it felt like it.  It did get really cold the last few night though. Down in the mid 20's and low 30's but it ina  warm up for the next few days.  Feeling alittle better flu wise and getting antsy to get out and do something.

I have come to town to get mail and splurged with getting lunch at The Katy Grill,  Its the home town bar and grill.  Good people serving good food.  Even if your not from here they still treat you like your family.  This is where I am accessing the Internet from, free wifi.  Thanks Allen :O)

In other news, Got a post hole digger for the tractor the other day, its a damned if you do and damned if you don't type deal.  Money is tight right now and I came across this deal for the post hole digger, really good deal too.  It's drilled one hole in its lifetime.  So I spent the money for it and turned right around and put a bid in on a  job and got it. Putting some new posts in at a park, so its going to be paying for its self right away. Just as long as I can get over this dang flu stuff.  Working out pretty good actually, I will be breaking even on the money but now I have a posthole digger to get other jobs with and do all my post holes around my place :O)

So anyway, not much has been happing around my place but soon things will be hopping again :O)  atleast I hope :O)
So take care and be safe all  :O)

Posted by Notlim at 1:18 PM No comments:

Hi,
Just letting everyone know that I'm still alive. Still in Kansas at my place.  Really haven't been doing much lately, I fell out of my RV a while back and kinda buggered myself up alittle.  I was hurting pretty good but about a week later it really intensivied.  allot!!  I endured it for a few days but it just got to be too much so I drove myself to the emergency room.  Now so some of you don't think that I'm a wimp lol  last year I was walking for some reason with my knife open,  yea I know.  duh!!!  :O)  Didn't say I wasn't dumb :O)  said I wasn't a wimp :O)  and I feel with it.  I was going to fall into a cactus so I tossed the knife to the side and just so happened, I twisted myself around and avoided landing on the knife.  But, I fell on the knife that I had tossed to the side.  Yep, landed on it and it stuck me in my leg, deep enough that I had to pull it of my calf.  Yep, it wasn't good.  anyway, pulled it out and got a piece of duct tape, pulled the wound back together and taped it shut.  One of the many wonderful uses of duct tape lol  band aid.  Side note:  when you use duct tape as a band aid, shave all hair from the area BEFORE applying it.  not sure which hurt worse, the stab wound or the hair being pulled out by the duct tape.....
Anyway, so you see. For me to go to the emergency room was a big deal actually.  I just couldn't take the pain any longer.   Went there and they gave me some drugs for the pain then exrayed me to find out that I had a kidney stone.  I had no idea that they hurt that bad.  I wish that on no one...  well, maybe one person.   anyway,  got back home, taking some pretty good pain meds :O)  Not really in the habit of taking drugs but when you have too, make sure they are good ones :O)
The emergency room made a appointment for me with a urologist so I went there and sure enough, more ex rays and the kidney stone was 7.3 mm.   too big to pass.  figures.  so I had to have a ultra sound thingy done.  guess what?    its now 6.5mm.    Needless to say these procedures are not cheap either and she (the urologist) is talking about wanting to do it again.   Right now its not hurting but once in a while so I have been delaying things.    Soooooo,  as you can guess I have not been doing much at all.  About to go stir crazy but I have been doing things around the place. just being careful not to fall or anything like that.

Yesterday was the one year anniversary date for crickets passing, was a sad day.  I spent it running around getting some things done and starting others. I also went over to my nephews place yesterday evening and spent it with them.  we played some xbox :O)  call of duty Modern war fare.  fun game if your into that sort.

February 12th will be another sad day, it will be the 4 year anniversary date for dads passing.  It just doesn't seem like its been that long.  Just seems like the other day I just talked to him on the phone or stopped by his house and chatted with him.   Never take tomorrow for granted people, when you think about saying hi to loved ones don't put it off till "tomorrow" because it may never come..  The night before dad passed away, we hadn't talked for about 2 weeks.  We had had a disagreement and we were irritated with each other.  we were binging difficult with each other.  anyway, the night before his passing I had thought about calling him but realized it was 9 pm and thought that he was probably asleep. So I didn't call him because I didn't want to wake him. Didn't want to bother him.  Little did I know was that about the same time he was telling mom that he should call me and say hi. But like me, he figured that I had went to bed already and didn't want to bother me.   Oh how I wish that we would have "bothered" each other and had just called.    But we didn't.     And the next day he was gone.    So people :O)  don't wait till tomorrow, don't worry about "bothering" your loved ones, take the time to tell them that you love them, tell them that you love them when you part, even if your mad at each other.           I love you dad and I miss you.

take care all and talk to you again soon :O)  be safe