Hey there all :O)  truly sorry that its been so long since I have been on here updating the blog.  Its been a busy time, it finally stopped raining awhile back and I have been really busy hauling materials for the ready mix.  Trying to make up for the really really short pay checks during the rainy time.  Its been nice to be busy and making some good money so I could buy more stuff for the house.
The kidney stone is still with me :O(  flairs up once in a while. Just something that I have to deal with when it happens.  Other than that I have been really good, no colds or anything but the usual aches and pains.
I got all of the stud walls up, all the electrical done but put the porch lights up but I have to repair them first and then sand blast them so I can repaint them. They are some antique lights that I took off a old house. They really are cool looking, will have to take a pic of them. A before and after picture.  I insulated the west wall today, and I bought most of the gas line stuff I need the other day but still need to install. after that, I will be able to call the spray in insulation guys and have them insulate the interior of the house and the interior roof of the shop.   very costly but worth it I believe.  Then I can put the rest of the ceiling boards in place and get busy with the sheet rock.
its been hot here lately, summer came back that's for sure.  Looking forward to fall weather, trying hard to be moved into the house before winter really sets in. I know that it  wont be done by any means but it will be enough to live in it :O)  will finish as I go.  Still need to put the stove pipe for the wood stove in also. oh yea, the dang end gable vents too.  You see, there is still allot to do lol
The house is really starting to take shape and is getting closer and closer to the move in date :O)  getting excited about it.  Still a ways off but I can see light at the end of the tunnel :O) 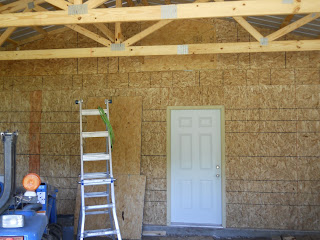 The wall dividing the house from the shop. all closed in and waiting for some siding. 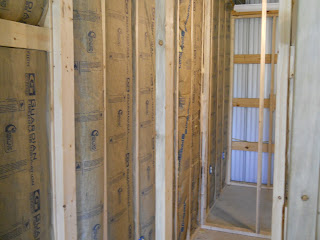 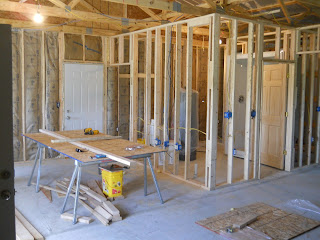 a shot from the corner of the house showing the west wall and bathroom. 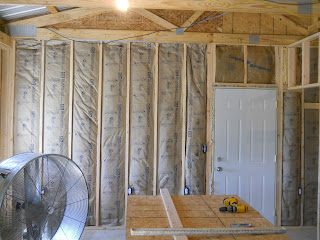 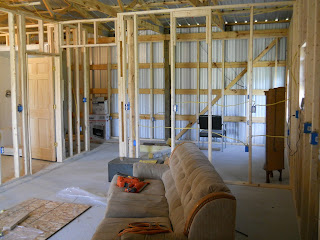 the coach was given to me by a friend, they were going to toss it out so I took it. the bedroom is behind the couch.   the kitchen will be where the couch is actually sitting.  Will be a galley type kitchen.
As you can see in the pictures, there are allot of plug ins lol  a lot of them...  Wont have to worry about not having any place to plug something in that's for sure :O)
Again, sorry that I haven't been posting as much, just been busy with work and the house. I will soon have a Internet connection of my own in my own house :O)  I will be able to keep you all updated a lot easier.  Got to go all, be safe and be patient waiting for my updates. :O)
Oh yea, got some deer hanging out at my place, a couple of squirrels and even one black squirrel.  The ground hog is still living under the van trailer, it comes out just about every morning to get a drink of water out of the stone watering trough my grand father made years and years ago. I honestly don't know just how old it is but I'm 47 and its been in the family a lot longer than that.  I think they are cool so I make them for others as well.   anyway, better go for now.  :O)  like I said, be safe all :O)

Posted by Notlim at 3:57 PM No comments: