Took this pic at Clayton and penny's a while back when we were working on the transmission in the RV. I made that birdbath/dog water dish :O) 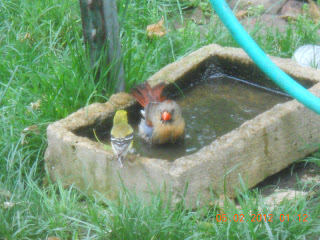 When we were at the missile silo we found these in one of the rooms, didn't know what they were at first then realized they were bottle caps of all types. 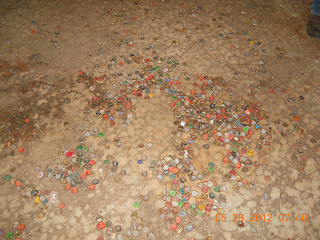 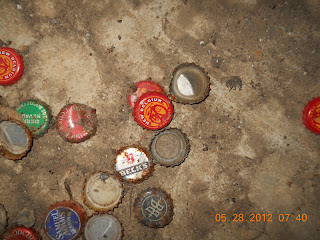 Then while walking around outside the silo area we came across these killdeer (sp) eggs.
and then..... 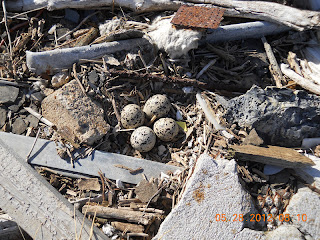 Down the road at the pump houses for the missile base, we started into the second pump house and it stunk of dead things badly  and I was just stepping inside and there was a ruckus inside and I jumped back out and Clayton slammed the door shut and we watched a buzzard fly out one of the other broken out windows.  wow  lol  had us going for a minute. We went back inside with the smell   uggg  and under a piece of steel there was this little buzzard just a hissing away..     Ugly little shit  lol 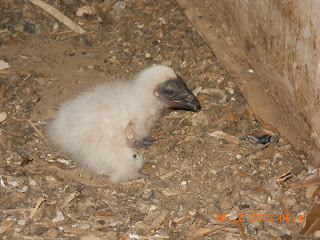 This is the main door that they used to protect the missile after it was inside. As you can see it is HUGE..  Its also about 18 inches thick. 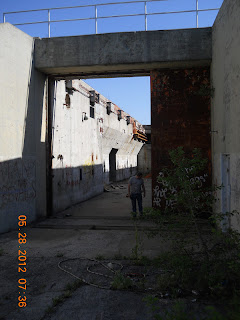 This is standing at the top of the ramp looking down to the above door.  Its about 100yds long. 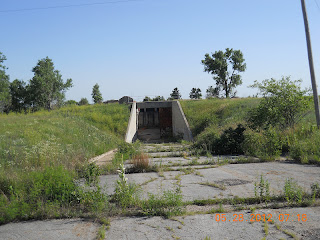 this is looking towards the door and ramp from the rear. This "Hole" used to be covered with a huge huge door that was mounted on rollers so when and if the time came to launch the rocket, it would roll to the left and then the rocket would rise up from a laying position to upright over top the exhaust tube.   I have no idea where the door went, or how they got it off to carry it away.  Must of used a lot of oxygen and acetylene!!! 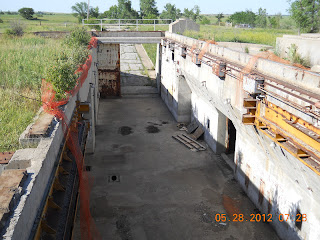 picture does no justice, but this is inside one of the machine shops that kept everything ship shape back in the day. 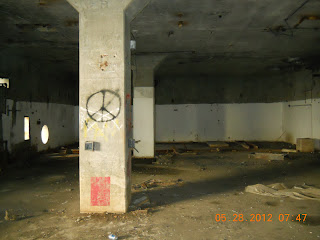 the walking tunnel that connects the control room to the missile silo area.  its 150 ft long with a branch tunnel that goes to the outside just outside the big door. 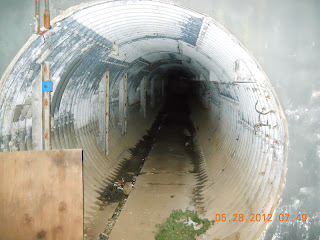 Posted by Notlim at 2:29 PM No comments:

This old missile silo is in Kansas where I call home, it was started back in the fifty's and my dad hauled dirt out of the hole back in the day with a old diamond reo truck. He said that the hole was really deep and the road up out of it was so steep that when he was coming out with one of the many loads, the motor mounts actually broke because of the stress..  (could have been that the old truck was wore out also :O)     He took me down there when I was around 11 yrs old the first time.  Its changed alot since then. The huge over head door where the missile was is gone now. The main big door is open most of the way now, and alot of the inner wires and metal has been stripped away.

This picture below is the exhaust tunnel outflow from the rocket when it would launch. there used to be a huge steel door welded in place over this hole but has been long removed i imagine for  the scrap value.  Its deep and full of water. 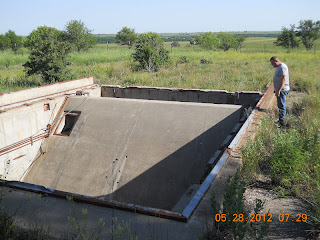 This is looking down into the exhaust hole. the picture doesn't do it justice for the size or the depth. 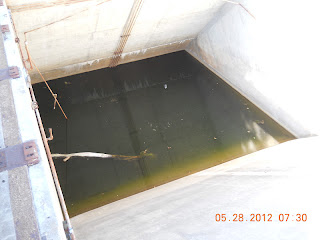 This is in the control room at the other end of a 150 foot tunnel. This is where they would have pushed the button that would have ended our world as we know it. There was a kitchen, bathroom, living quarters, storage rooms and of course the room for all the controls for the running of the missile silo. 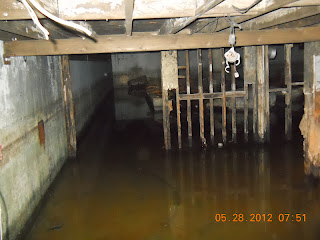 Not sure about this bed frame but it looks about right for the time period. 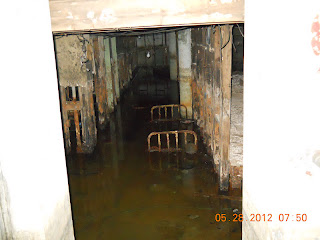 just on of the many wench and cable rooms that is around the site. would really like to have seen how big they were. 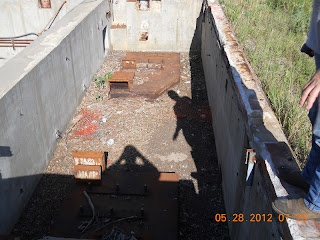 This is a water pump house about a mile down the road from the site. There are actually 2 of them sitting there by the creek. Not much left inside anymore. 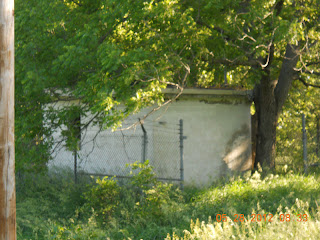 Posted by Notlim at 1:42 PM No comments:

your guessed it lol  its the moooooon!!! 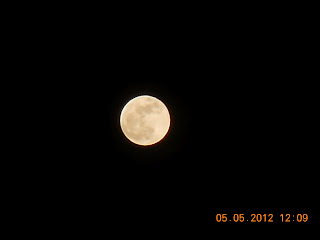 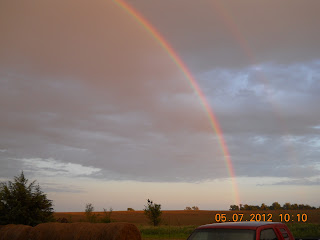 and one very fat cat lol 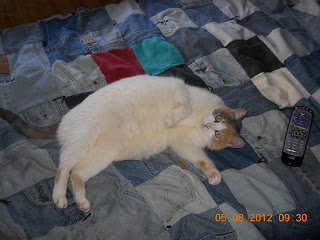 You said for me to post something matt, so there you go.
Posted by Notlim at 12:43 PM No comments:

nature in the city

I stopped at the post office and saw the liqueur store lady looking up at the roof of her store, I looked but couldn't make out what she was so interested in. I walked over and low and behold this is what I saw up under that loose piece of tin. Apparently the starling had made a nest up there and the bull snake had found it sitting on its eggs.  soooo. 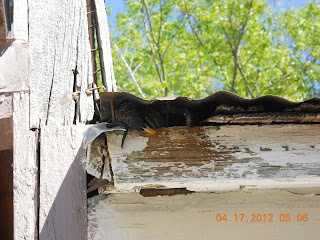 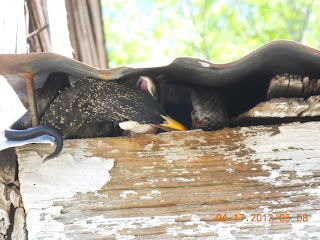 as you can see it had squeezed the life from it and was trying to swallow it. After several attempts it gave up. Don't know if it was too big or if it decided that it couldn't swallow it under that piece of time wrapped around a couple of nails or what the deal was but it left it behind and never returned. 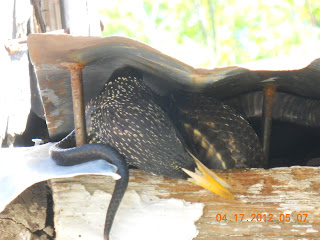 Sad for the bird but that's nature. 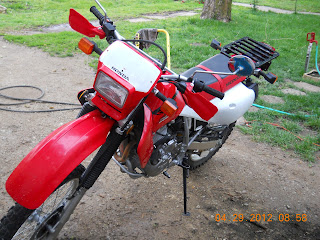 2007 Honda XR650L Enduro
Street legal for the highway or I can hit the back country roads :O)

I didn't want to spend the money but I decided that it would make life allot easier and cheaper to have this to run around on checking things out and going to town for groceries and such.  Last year I only had the RV for transportation and when i needed to go to town I had to load up everything up just to go to town for a day.  It was a major pain in the butt and it was in no way cheap on gas.
I also got myself into trouble twice by exploring some back roads, one time for sure I wasn't too sure if I was going to be a permanent fixture out there or not.  This way, I can do some scouting for places to park for 2 weeks at a time and I can take a gold pan along and do some sample panning to possible find a really good spot for prospecting as well.  I am sure that there will be days that I will want to just goof off and just go see where a road will lead too.  So I guess I get to have my cake and eat it too :O) one of the rare times that I get to do that lol

Posted by Notlim at 8:47 AM No comments:

This is my transmission out of the rv, yes it was in many many pieces.  A couple of times lol  But all is well now for it is in and working great.  Thanks ever so much Clayton :O)  couldn't and wouldn't of did it without you. 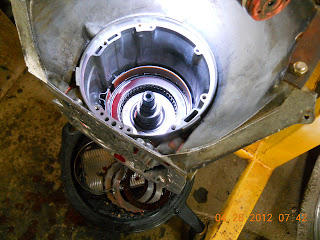 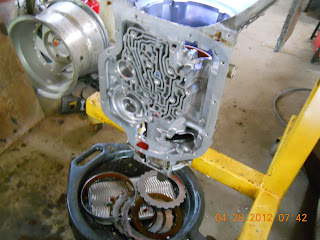 there are tiny steel balls, springs galore, allot of bands and clutches that have to go just so so...  little pistons that really are not mans friends.  Things that have to be aligned just right or its NOT going back together..  And then there is a screen that has to go in one way and only one way or your    ummm well, Screwed  lol    oh yea, learning curves are to be highly expected :O)  like removing the trans pump lol   Sorry clayt  :O)  But I did just stand there and tell you that you had better turn the bolt on the other side to even it up lol   We know better next time . 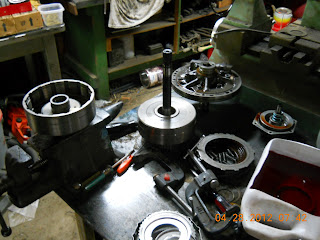 many many pieces and this doesn't show hardly any of them actually. 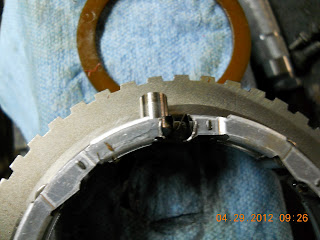 and this is what you don't want to see inside a automatic turbo 400 transmission.   Makes up pucker up pretty tight :O)
All in all, it went pretty good for never being inside a turbo 400 tranny before,  learned allot of stuff in the last few days  :O)  Going to pack the wheel bearings on the trailer tomorrow and then things will mostly be ready to head back to Colorado for the summer.
time for leaving is getting close and I am getting pretty excited about going :O)
Posted by Notlim at 10:04 PM No comments: