went out picked some squirrel food the other day.  Might be enough for the winter, maybe. They squirrels up in kc we lovingly call them Tree Pigs lol 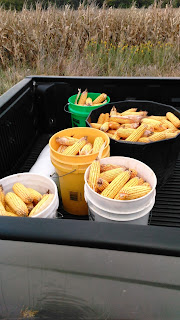 I was trying to capture all of the humming birds in the pic. only got three but there was five buzzing around. 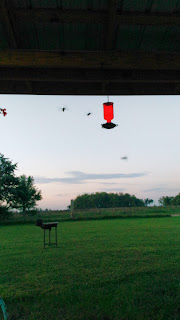 Red and Whitey, wonder which one is which? lol 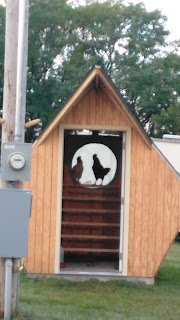 these are a bunch of poles that I bought for  1 dollar apiece from the local phone company. Going to be used in the fences for the goat and pig pens. Going back to get some more soon. 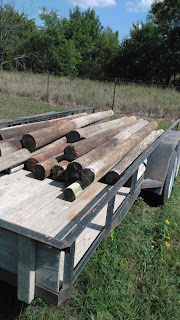 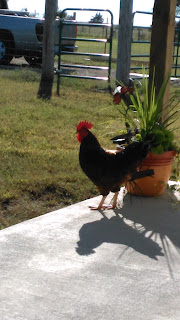 The next two picture are from work, was trying to show you all the graded radius in the ditch that I had just done. Might not look like much but there are a lot of hand and wrist coordination going on in those pics. I don't have a steering wheel in the grader, its all run by two joy sticks.  and to do those radius cuts like that, there is ALOT of moves lol 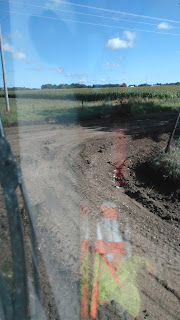 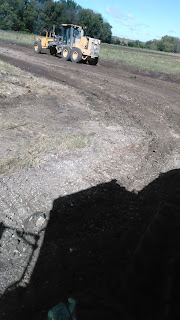 Yes, that's a glass of wine on the fender of my tractor :O) That's just how we roll out here in the country :O) 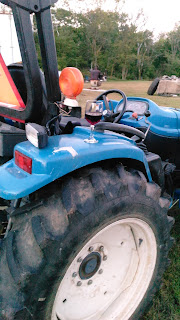 Here is the chicken house and chicken pen (aka Alcatraz) 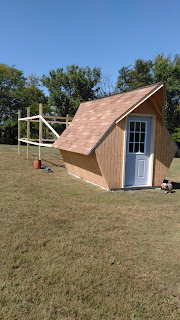 Just some pretty clouds and they were actually red like this, the sun was rising. 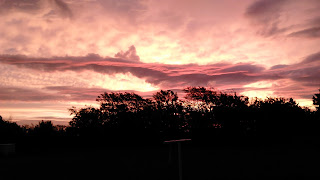 Went snooping one day at a old abandoned farm and this is one of the things I found there. Pretty cool picnic table I think :O) 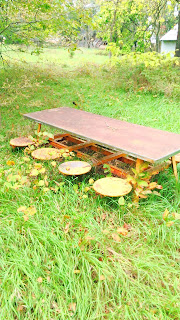 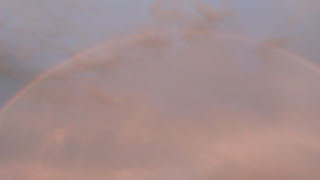 This is the machine I got to run the other day, its a joy stick operation as well. was nice :O) 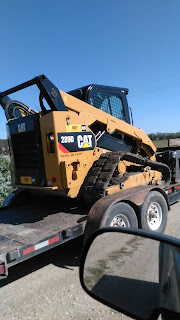 We tore a old bridge out a few weeks ago a mile east of my house. Boss told me I could have the rocks if I wanted them. Yes they at the house now :O)  Going to be doing some major land scaping with them someday soon I hope.
If you look close you can see my cap (for a reference of rock size) sitting on one of the rocks 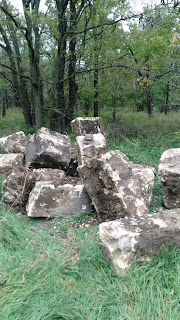 more rocks, might make some into some large water troughs as well. 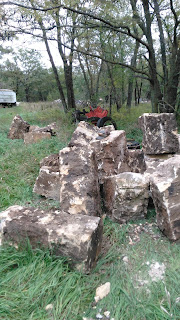 My pancake cast iron griddle, cleaned and seasoned again. worked just fine the other weekend when we had mom and uncle out for breakfast :O) 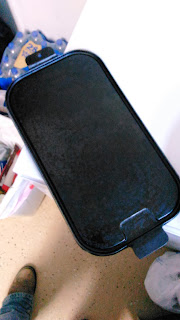 and this, is my new grill I bought a while back. Its NOT supposed to smoke like that. :O( it had stormed the night before and I turned it on to dry it out some. Guess there was a build up of grease in there as well as some water. I just about had a melt down. Things got hot and stinky.
I put it out and its working again just fine. a little more careful about things now and I clean it more often lol 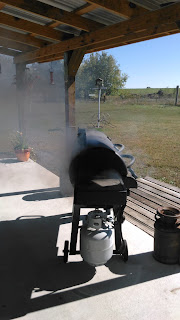 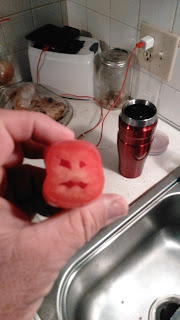 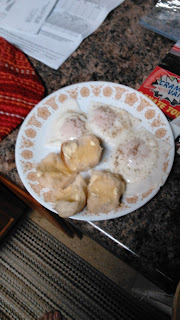 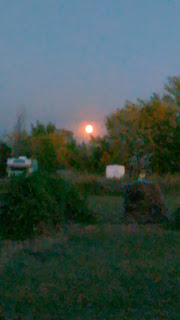 I love this old Toyota and its even forsale but for the condition of it she wants too much :O( But just look at that thing :O) its a custom cab, Factory I might add. 4x4 22 rte motor (T is for turbo) rare. very little rust at all. but its rough. would need a lot of tlc. 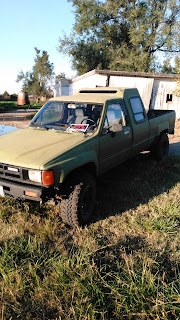 Just a random pic of a old grain elevator. thought it was cool. 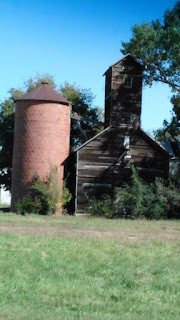 Just one of the MANY MANY hauls out of the garden. 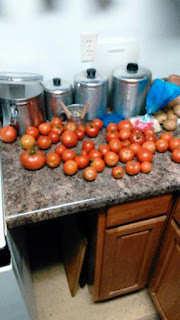 OK, its really time for bed now.  Take care and will talk to you all again. :O) Be safe.

Well, I had big plans of blogging tonight. Couldn't even come up with a post title.    wondering what to talk about.

I went to my doctor today, one of them anyway. Lupus doctor, didn't learn much new.  Told him I didn't have much money so we needed to just do the important blood tests, down to two blood tests and a urine test.   I was getting anywhere from 8 to 11 blood tests every three months. plus the urine tests and there is about 7 to 9 tests that they do on the urine. can we say expensive?  very costly even with insurance. When it wants to pay it seems like.
The chickens are doing good, got 4 free loaders though. They better get serious pretty soon or its going to get very serious for them...
As you all know I bought  a new to me pu, I made the deal with the understandment that they would put new tires on it. They did and I kept the old tires which weren't wore out but would of had to buy new in about 6 or 8 months ( I don't drive a lot of miles anymore) I brought them home and yesterday I put them on a flatbed trailer that I have. Its been used for a while now as a place to store a bunch of steel and stuff like that. Well, its ready to roll down the road and be useful for something better than what its been doing. which is nothing.  I have to unload it now but will be nice to have it to use again. I had made that trailer back in 97, it used to be a camper trailer but the camper went bad. Tore it all off, reinforced the frame, shortened it about 8 ft. (still 16' long ) put some 2 x 12 planks on it and made a really nice trailer. Don't haul cars on it, would probably haul it but why take the chance and break it.
Doing laundry right now. exciting huh? lol 10:30 at night and I'm doing laundry. Why? Because I cant seem to sleep much anymore.  Its weird, I can be ready to fall asleep during the day at work and when I get home at first I'm so tired but do you think that I can go in there and go to sleep? nope, not very often can I do that. gets frustrating that's for sure.

The day before yesterday I was petting patches and found a nasty scab sore area on the side of her head. Looked really bad, I made a vet appointment the next morning. Took her over and she has a bacterial ear infection.  The weird part is the infection came out on the side of her head. guess it does that. She hates me twice a day now. I have to give her ear drops and then some amoxicillin liquid too. She can handle the ear drops but the liquid med is really nasty I guess because she fights me hard not to take it.  not pretty.  She's starting to act a lot better though.
Made some inside window sills today for the house windows. Patches is getting used to have one to sit on and look outside from. maybe my plant in the kitchen window will do a little better being closer and in the more direct sun light. I found one of those glass water bulb things and its made a big diff on rather it gets water or not lol I can see the bulb and when it needs filled. I need to get a lot more of them for more house plants.  I like it in the mornings when the sun is shinning thru it. makes a lot of colors. The cooler weather seems to be getting here, highs in the high 60's next week and lows in the forties :O)  good sleeping weather If I can get to sleep :O/

I'm really looking forward to this winter actually. I just would like for it to snow some, if its cold there should be snow on the ground and I should be able to use my v-plow on my grader to plow snow :O)

I cant believe that's its already Nov. wow but the time sure slips past a person the older you get.
Thanksgiving will be here before we know it then Christmas will be zipping by and then it will be another new year.  I have no idea what we will be doing as a family this year for either holiday, the family still hasn't recovered from the nonsense a while back.  So who knows for sure. Might just have it out here, its been a pretty small gathering anymore. Might have to go to the casino again. lol

Think I will start getting my cast iron ware gathered up and start re seasoning them. Some have to be sanded down completely and started over from square one.  I like me some cast iron ware :O) Not sure where I'm going to put all this stuff in the house :O) I really need to get some more shelf's or buy something to put them into. Going to move the freezer out into the garage soon too. that will make some room in the kitchen to do something about the shelving problems.

whelp, I just went blank again so with that I will say good, be safe and talk to you all again soon :O)

Posted by Notlim at 9:57 PM No comments: