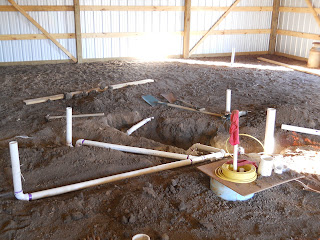 This is what I have been doing lately, digging digging and more digging.  talk about some hard packed dirt, holy cow!!! 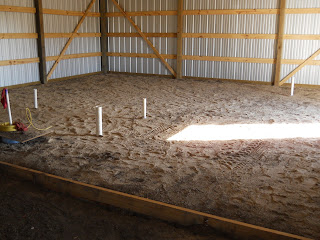 And this is the almost finished deal.  I have the re bar laid down too but no picture of it yet.

the blog is acting wonky!!!!!   trying to post some pics but its not going well.    not sure what the problem is. Besides me not knowing wtf I'm doing half the time lol
Posted by Notlim at 2:14 PM No comments:

So much for Justice.

I got the bad news the other day about my appeal. No deal..   I had a bad feeling about the appeal, and I'm not really surprised that it was turned down.  Very disappointed that's for sure because even though I didn't totally believe that it would go my way I still had hope that it would..
It really amazes me how a person can just lie about things and get what they want. Ex specially when it comes to the court system.  All you have to do is get a local lawyer and tell a local Judge your sob story lies and you can get a Protection From Abuse order even though its all a pack of lies.  AND you can do this with out  a shred of evidence or PROOF...  Even if The liar is a 2 time convicted felon and the accused never had a record of any type!!!!!
Now i wait to see if this individual will try to get yet another PFA (I had no idea what this "pfa"﻿ even meant until all this started)  against me. I asked my lawyer about it and he said that since I have not contacted her in anyway this last year that there is no reason for the judge to grant it.  Hell, I didn't think she was going to get the first one because it was all lies anyway but so little did I know.
I have learned that this PFA affects people in alot of ways, cant get certain jobs (atf back ground checks), cdl hazmat in out, loose the right to bear arms (while the pfa is in effect)  loose your concealled weapons permit if you have one.  It really messes with a person, I had no idea how much it affected a person in so many ways.    I am moving on with this, I don't like it in anyway because I really prided myself on not having a record of any type, but so much for that now.  I will move on despite this crap!!   The liar did say one thing once that was so very true, she said that I was a survivor. And that I am!!
She tried her very best to leave me broken,
she failed.....
Posted by Notlim at 10:34 AM 1 comment:

This is lazy lazy lol 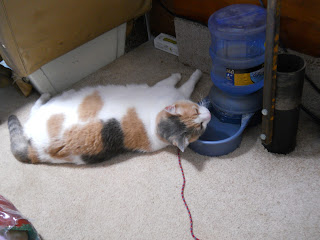 She was actually drinking water from this position right before I snapped the picture.

Posted by Notlim at 5:32 PM No comments:

I find myself as of late missing being on the road and seeing the sights and exploring what’s over the hill and down the valley trying to find that elusive gold nugget. I really enjoyed the last two summer immensely.. It was lonely at times, but it was also a lot of fun.

At times I wished that there was someone to share the sights and stuff but not that much lol. Summer before last there was several times that I hang out with some people that I had met and it was really nice to share time with them and to visit and such but I also liked it when I would go my own way also. Strange actually, I would miss mingling with people so I would go to town but after awhile of being around people I would say goodbye and go off to be alone again lol

Guess I can only take so much of people and then I have to get away. I like to visit and be around people but only for so long. I like my solitude, what can I say..

I wont have the chance to get away and travel like I have for the last two summers, but someday I will do it again. Just have to take short mini vacations for a while :O)

In other news, I have recently retired my class c motor home. Its kinda sad actually, went to a lot of places and seen a lot with that thing. Spent some very good times in it, Cricket and I traveled far and wide for a while until she passed away. Don’t want to forget to mention the cat lol Patches is still with me. We had to move out of the rv a while back, didn’t know it but there was a leak in the roof and it had seeped into the ceiling insulation and I believe into the walls as well. There the moisture turned into mold inside the walls and ceiling. Not a good thing when you have a allergy to molds. I kept getting sick and at first I thought it was just that time of year and such but the more I looked back and thought about it it became clear that something was wrong. I could smell a odd odor in the rv when it got warm and couldn’t find what it was… Drove me insane honestly, I finally tore into a few spots and figured out it was mold. Thankfully, my nephew and his wife told me that I could borrow their fifth wheel camper until I got my house built and livable. Thank you both very much :O) Its been right at a month since we brought the fifth wheel over and I moved into it. Man :O) talk about having room to move about lol Its like going from a single room apt too a 2 bedroom house!!

The cat didn’t know what to do honestly, it was used to having a limited run space, like 12 ft max and now it has like 30 ft to run. Didn’t take long for it to get used to the extra room, she used to sleep with me all the time. Would crowd me all the time in bed but now she doesn’t come visit me until morning and she wants food. Sometimes she will sleep in the other bed across from me but not usually.

It does take more to heat but for the extra elbow room its worth it :O) I actually have to walk to the kitchen, walk to the bedroom. The only problem that I have is the condensation that builds up on the windows and around the door frame. Not sure how to remedy this problem, will have to Google this and see what others have done to fix this problem..

Anyway, just thought I would let you all know whats going in in my neck of the woods.
Posted by Notlim at 5:22 PM No comments: