I got bored the other day, didn't really want to do anything major. Was feeling rather lazy honestly but couldn't imagine wasting the intire day so I made this... 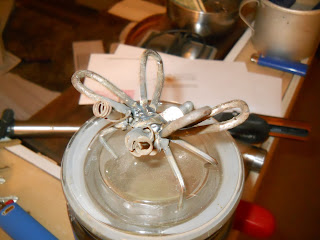 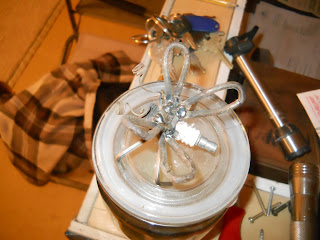 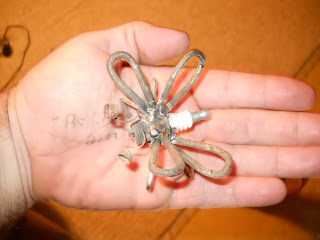 as you can see I started with a spark plug, then I made the wings out of some old fence staples, the legs are old allen wrenches, then I took a old spring, stretched it out some to make the antennas and welded everything together to make this "bug"   lol
be safe all :O)
﻿
Posted by Notlim at 4:45 PM No comments:

hey all, Not much has been going on around here. Just work mainly and nothing else it seems like. I did cut some more firewood the other day but I have yet to hook up the log splitter and split any of the bigger chunks. Passing myself I guess.
After the ice storm I have been busy at work clearing limbs and trees from the roadways on my route, done now but I have been getting a lot of free firewood that way as well. It wont be ready to burn until next winter since its "green" wood right now. Has to cure before it will be fit to burn. I'm not a big fan of burning any type of green wood, causes to much soot creosote build up in the chimney.
I did get my uncle to get up on the roof to see if there was any loose screws that might of caused the leak in the roof but didn't find any to speak of. Found a couple crooked ones but not even close to where it was leaking so its still a mystery.  Frustrating.
I did get another post put in the ground tonight on the west fence, sure is slow going during the week now that the sun sets so early in the afternoon. I'm hoping to get it done this weekend, that's if it doesn't rain and snow like they are predicting.  One of the guys at work keeps asking me if I have it done yet, I asked him why he was so interested in it being done and he just laughed and said you will see lol  And then he said something about a miniature donkey.   Not sure if hes just joking around or if he is serious lol
well, I just wanted to really say hi to you all :O)  so I will quit rambling on and just say goodnight and be safe all .    talk to you soon and will post some more pictures of some stuff one of these nights.  If it rains and snows this weekend I will catch you all up on here.
oh yea, saw something interesting on tv tonight, it was about a guy that thought he was dieing so he hide a treasure and gave some hints about where its at. Maybe you've already heard about this but its new news to me lol  His name is Forrest Finn or maybe Fenn.  google it and it will pop up lol  kinda interesting.  ﻿
Posted by Notlim at 8:06 PM No comments: