Here is the bone in chicken, it really is pretty easy to take the thigh bone out, just need a good sharp knife and just start in doing it. Wont take but a few and you will get a feel for it and before you know it your will be whipping them out :O) 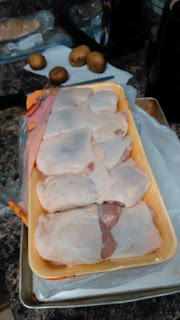 There's the pile of boned out on the right and the little pile on the left is the bones and fat trimmings with a few meat pieces. Like I said earlier, will boil them up and make some home made chicken broth. and of course you will need to pressure can the broth to safe it for later use. So we are saving all the stuff in the freezer until we have enough to process. 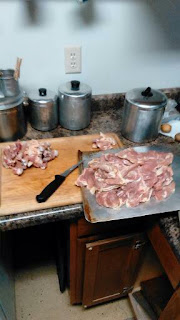 all packaged up and ready for the freezer, I divide them up into four thighs per package then I toss them all into a gallon size bag, keeps it from getting freezer burnt for quite a while. They usually don't last long enough in the freezer to get burnt lol 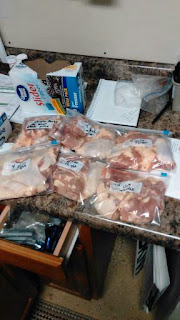 The fat cat :O)
I was thinking the other day about patches and what all we have been thru together and realized that she is getting old. She was born in the spring of 2005, She was such a cute little kitten, She had a eye infection in both eyes and couldn't see. She was a outside barn cat up till that moment lol I cleaned her eyes up, took her to the vet and she got some shots and such. I brought her home and that was the last time she was ever outside willingly lol  Cricket and I just about lost her twice when we were living in the motor home, once she fell out of the screen door when she jumped against it to catch a fly, she freaked out and ran under a bunch of junk in the yard.   Got her back in and she wouldn't touch the screen door again, she would sit there all day and watch out it but would not touch it lol. The other time was when we were in the mountains and cricket I had walked up a dirt road to make sure it was safe to go up with the rv and trailer, we had got in a pretty dicey place once and didn't want to do that again...  But anyway we came back and was getting ready to go and I heard the cat meowing kind of weird. cricket was hanging out the window just about ready to fall out looking at something. It was the cat lol she had fallen out the driver window and was panicking under the rv. Good thing I heard he and cricket was acting stupid hanging out the window lol  after that she never got close to the window either lol   Patches will be 12 this spring. 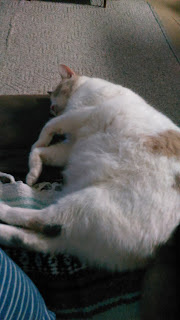 Well all, going to get off here and get ready for bed,  I still haven't figured out the problem with the pictures on windows ten and my phone. Once I do I will be bombing my blog with a lot of pictures. I might just have to go some where and have someone show me or fix my problems that I am having with this.  I have so many pictures I want to share with you all. Bare with me :O)  I will figure it out one way or the other :O)
Be safe all :O)  talk to you all again :O)

Posted by Notlim at 9:16 PM No comments: